Each child from the appearance of the first teeth is frightened by such an “evil and terrible gray wolf” – a terrible caries that necessarily overtakes if the baby will absorb a lot of candy or forget to clean the teeth. But is it really so, or do adults sometimes do not know what they are dealing with when they say this terrible word “caries”? Let’s find out!

In one of the last articles of the blog of dentistry “Swiss Dent”, we learned about the causes and prevention of tooth decay, and also exposed many myths that envelop this terrible (or not so?) Disease. Now let’s see what the clinical picture of this disease is.

What are the types of caries? 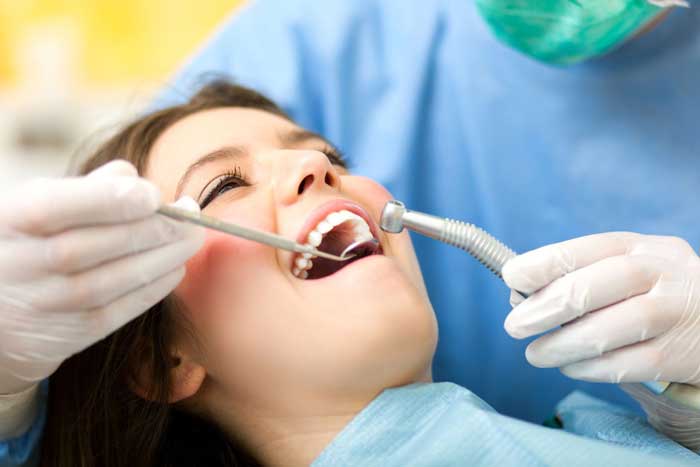 In past articles, we have determined that tooth decay is the most common disease in the world, which leads to the destruction of the tissues of the tooth, enamel and dentin.

There are only two kinds of caries, and they distinguish it precisely by the stage, at which moment there is a destructive process. If only a demineralized speck is formed on the tooth (depending on the activity or stoppage of the process, it may be white or pigmented), then this caries is called early. If the process of destruction of hard tooth tissues begins, this is a caries of the late stage, in which it is urgent to run to the dentist “Swiss Dent” and save your teeth from further destruction and removal.

In the late stage of caries, depending on the depth of the lesion, the surface, middle and deep are distinguished. The difference in symptoms is only that pain and discomfort appear more often, manifest more strongly, and lead to inflammation much faster.

How is tooth decay formed? 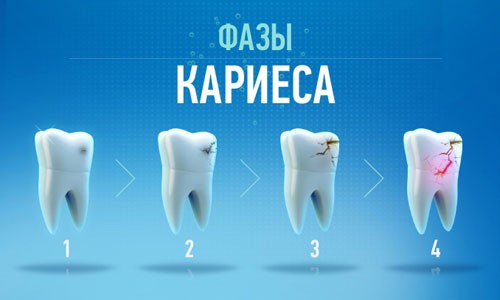 When a person chews the food and finishes the meal, small particles remain on his teeth – the remains of food, which, in conjunction with saliva, continue to be processed and dissolve after the end of the meal. To clean the teeth of this substance completely the body can not, therefore, it is required to help him with a dental thread (to clean the interdental spaces), a toothbrush (to clean the surfaces of the teeth, especially chewing), and a rinse aid (to remove the remains from the entire oral cavity and fix the result) . If you do not do this after eating for 72 hours, then this soft coating will harden and settle on the tooth, like a fossil.
But in this fossil, bacteria still live that process carbohydrates into acid. While this process continues inside the formed raid, the tooth enamel in this place softens and softens, and the dentist can already diagnose a white or pigmented carious stain.

This is the process of nucleation of caries, which in the future leads to destruction and even to the risk of tooth extraction by a dental surgeon.

Development of caries: the second stage

So, the carious process has begun, and to stomatologists to clinic you and have not got. It is not strange, because the first stage of caries is almost asymptomatic and does not bring unpleasant sensations to the patient. But the process is aggravated – the enamel becomes softer, thinner, its protective properties are reduced, and the bacteria have already reached the dentin, which is not so resistant to the caries process. Therefore, the development of the disease is sharply accelerated, and soon the patient already feels a “hole in the teeth,” where food constantly gets to. And if she has not started to get sick, she will soon be, because it is impossible to clean new food remnants from the cryosa cavity with a toothbrush, thread, or the best conditioner. And this means that the development of the disease begins again and again, and now the patient already grabs the head and runs to the dentist.

And he already diagnoses middle or deep caries, grabs the drill, and the negligent patient complains about bad genes and ecology.

What to do to not get sick of caries again? 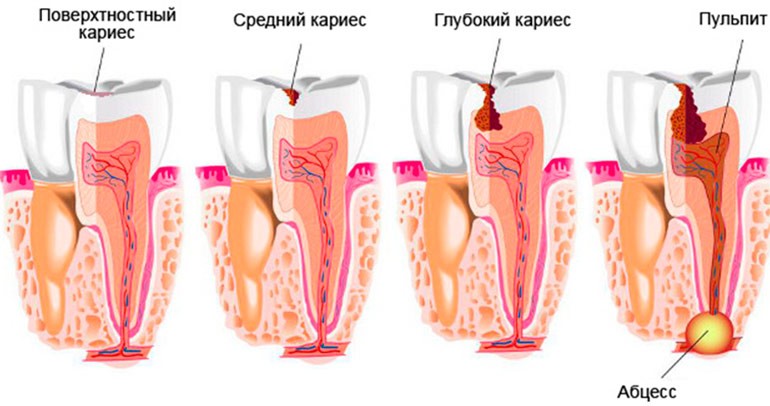 Probably, now you will not be surprised at the podnadoevshemu advice to brush your teeth twice a day, use dental floss and rinse. Try to observe the diet, get rid of the addiction to smoking, eat more vegetables and check the teeth at the dentist every six months. After all, as you can see, there are not many kinds of caries at all – not to prevent an insidious disease or to detect it at an early stage means to keep your teeth healthy for many, many years.

But if your tooth is finally damaged by caries – a qualitative replacement is necessary. In this case, implantation will help.

How is dental implantation performed?

Implantation of teeth is quite long, but the result is worth the effort, because it is very difficult to distinguish an artificial implant from a real tooth. In addition, modern methods of implantation ensure that the new tooth will survive with a probability of 97%, and the procedure itself is less traumatic than the removal of the wisdom tooth. A comprehensive examination also minimizes the occurrence of complications, so you can return to work and familiar business the next day.

How to prepare for implantation

Before the procedure, it is necessary to exclude all possible factors that interfere with the installation of the prosthesis. Categorical and relative contraindications for dental implantation should be highlighted.